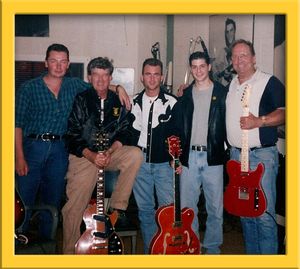 and the legendary Paul Burlison.


This album is dedicated to the memory of Paul Burlison. 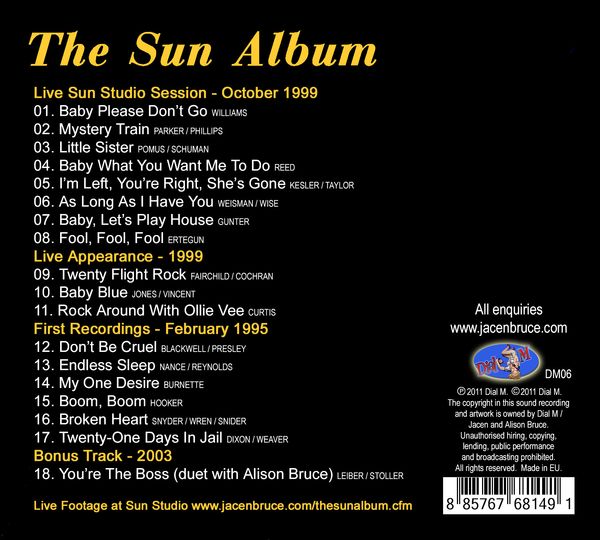 Jacen first met Paul Burlison when Alison booked him and Rocky Burnette to play at Swindon Rock ‘n’ Roll Club in 1997. Paul suggested that Jacen and Alison should ‘look him up’ if they were ever in Memphis and when they visited the city in October ’99 one of the first things Jacen did was to pick up the phone.

Paul took the day out to show them his Memphis, he shared his memories of Sun Studios, Elvis, Johnny and Dorsey Burnette, pointing out the places he’d played and the gigs he’d seen.

Jacen was to be recording at Sun Studios later that week, his plan was to round off the holiday with a jam session, covering some of his favourite Sun classics, nothing complicated, just a live session, recorded straight onto DAT.
He thought the evening would be a memorable and personal souvenir of Memphis, but it was about to turn into something that was a great deal more...

James Lott was due to play guitar but a road accident had left him with a damaged hand so while he was still able to engineer the session he’d arranged for a session guitarist to play in his place.

Jacen decided to invite Paul along too, not only was Paul delighted to take part, he brought along some musician friends, Brad Birkaphal and Ron Perone from The Dempseys.

As they arrived at Sun Paul was delighted to see that the ‘session guitarist’ was none other than his great friend Ronnie Smith – Ronnie had played with Elvis in 1952 and 1953. Suddenly a casual jam session was turning into a once in a lifetime experience...

This album is dedicated to the memory of Paul Burlison.
Recorded Live at Sun Studios, Union St, Memphis Tennessee
with legendary rockabilly guitarist Paul Burlison from The Johnny Burnette Trio,
guitarist Ronnie Smith from Elvis's School Band
and The Dempseys from the film Walk the Line

A fly on the wall experience complete with studio chat.

I Forgot to Remember to Forget "Sun Studio"

If I Could See You One More Time


The session had finished when Ronnie Smith

picked up his guitar

and started to play an instrumental version of

If I Could See You One More Time.

between these two great friends

with royalties earned from 'Heartbreak Hotel.'

knew and worked with Elvis at Crown Electric.

When Elvis heard that the Rock 'n' Roll Trio were

looking for tracks for their new album

he invited them up to listen to

a stack of demos at Audubon Drive.


Here, for the first time, Paul recounts this unique moment;

present at the house were Natalie Wood and Nick Adams.